The latest thing I'm working on. Posted for a friend who wanted to see 'em... 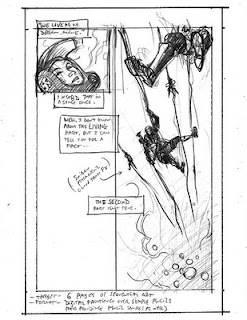 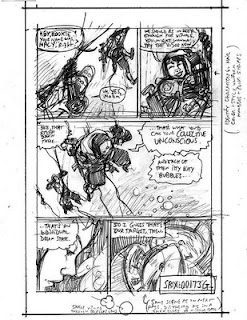 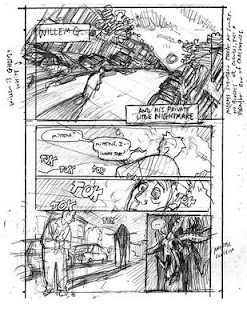 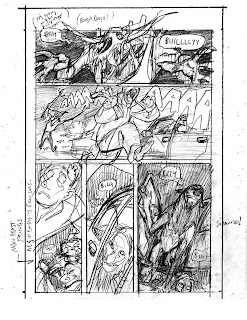 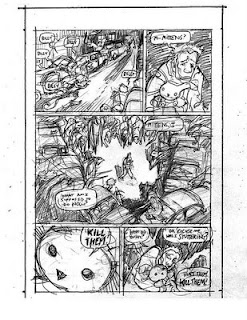 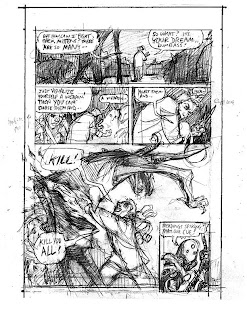 This is probably going to be the last one of these for the time being, as there are a lot of other things I need to work on right now... 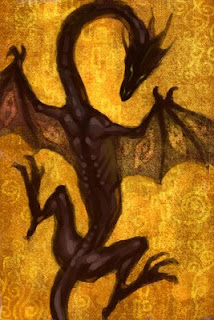 When it comes to bestiary beasties, the dragon - along with the related worm, wyvern, et cetera - is overladen with metaphorical freight. Where European mythology is concerned, it's kind of an all-purpose symbol of evil. But one recurring theme is its fondness for hoarding and guarding treasure; this is certainly true of the dragon in the epic poem Beowulf, and the Fafnir of Norse legend is a human (or humanoid) who has metamorphosed into a dragon during his years of jealous gold-hoarding. In other words, the dragon originates in the lust for treasure, so the motif here is inspired by an artist known for his fondness for gold decoration.
Posted by Mark Simmons at 5:21 PM No comments:

And now for something a little different!

It's been a frustrating few days as far as my daily monster project is concerned. Not only have I had school starting up and guests visiting, but for the last couple days I've been spending hours struggling with a single critter. At this point I'm forced to conclude that it's not so much a matter of drawing composition or technique, but the fact that my creature design simply doesn't work. Allow me to illustrate: 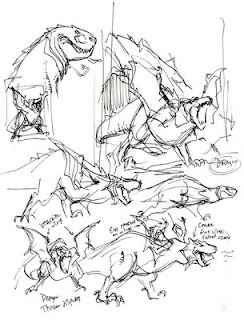 I think my idea of the dragon was permanently fixed by Paolo Uccello's Saint George and the Dragon, which I saw in London's National Gallery when I was a little kid. Not only does Uccello's dragon have two legs and two wings, thus obeying the basic laws of vertebrate anatomy, but it has these lovely little circle patterns on its wings which resemble the "eye spots" seen on butterflies. Based on this, I did some sketches of a carnosaur-like dragon with vestigial wings and a frilled lizard collar which it could use as part of an intimidating threat display to scare off enemies. Unfortunately, not only was it hard to show off this design in the portrait-style dimensions I've been using thus far, but no matter how much I fiddled with it the end result always looked like a tyrannosaur with a frilly collar and funny little bat wings. Which, after all, is exactly what it was.

So I've decided to go back to the virtual drawing board with this one. In the meantime, I did a new version of the salamander, since I wasn't really happy with the old one. At least I've accomplished something!
Posted by Mark Simmons at 5:42 PM No comments:

Whew! I didn't have quite enough time to finish this one before I left for class this morning, so I fiddled with it some more this evening. Since I have a guest visiting tomorrow, I might take Friday off and resume monstering this weekend. 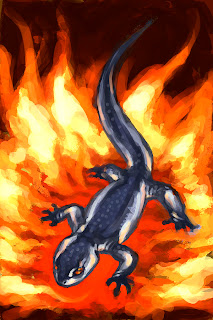 The salamander, like the vast majority of bestiary critters, is a real animal with imaginary characteristics. The salamander's ability to survive the flames was attributed to its intense cold and fire-extinguishing secretions, and asbestos was originally believed to be made from salamander wool or from their woven cocoons. According to classical philosophy, observes Jorge Luis Borges, "If there were animals of land and of water, then there had to be animals of fire. It was necessary for the dignity of science, therefore, that there be Salamanders."
Posted by Mark Simmons at 8:28 PM No comments:

A fairly simple one this time. I belatedly realized that Photoshop has an "Ocean Ripple" filter that provides a pretty realistic watery effect, but there's something to be said for simplicity. 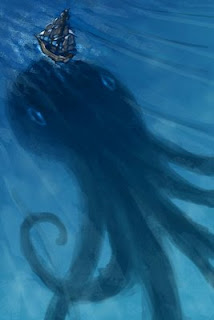 My take on the kraken is inspired by the Hook Island sea monster, which I think is a pretty awesome cryptid even if it was just a weighted plastic tarp. The kraken was said to float quietly like an island and then suddenly submerge, dragging down any ships unlucky enough to be tethered to it. According to a medieval bestiary translated by T.H. White, it serves as a metaphor for unbelievers who trust in the devil: "They anchor themselves to him, and down they go into the fire of Hell." This also happens to be more or less the plot of the sci-fi horror movie Event Horizon.
Posted by Mark Simmons at 1:22 PM 3 comments:

The daily streak continues! I was tempted to keep tinkering with this one, but the discipline of the one-hour time limit is too important to be discarded on a whim. 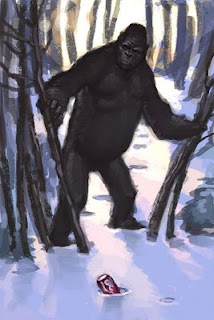 This one's for my wife, who says that bigfoot is her favorite monster. I think part of the charm of this legendary "cryptid" is the notion of reunion with a long-lost sibling, a form of human-like but non-human intelligence right here on Earth. But if the bigfoot really exists, I wonder if it would be as excited by that prospect. Perhaps that's why it remains so elusive.
Posted by Mark Simmons at 12:11 PM No comments:

I think this one came out pretty well. This time I'd actually figured out what I wanted to do ahead of time, but when I sat down to draw I did a quick reference search and decided to do something entirely different. 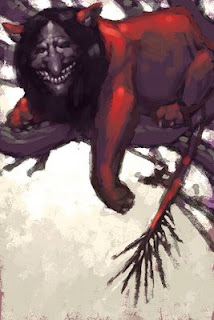 Today's featured beastie is the manticore, which literally means "man-eater." Like the catoblepas, it was apparently based on reports of a real animal, in this case the tiger. Unlike the previous poisonous creatures I don't find it terribly sympathetic; the manticore eats people because it wants to, and its humanoid face makes it something of a cannibal too. When I decided to put it in a tree, I was thinking of the opening scenes of Paul Schrader's Cat People, but the end result is essentially an evil Cheshire Cat.
Posted by Mark Simmons at 12:51 PM No comments: