Sunday at the Zoo

Assorted critters from today's expedition to the San Francisco Zoo... 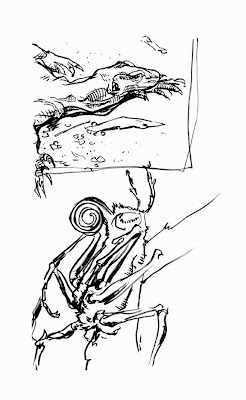 The newly installed baby Komodo dragon, and a giant-sized butterfly from the wonderful Big Bugs exhibit. 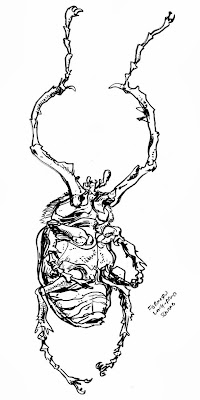 The giant-sized scarab beetle was so awesome I had to add extra paper to the top and bottom of the page. 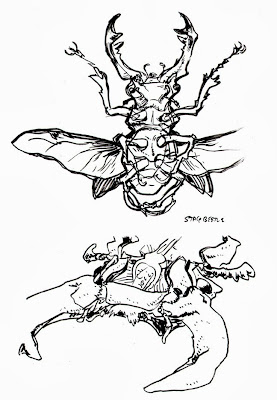 There's an anatomical cutaway of the stag beetle so you can see his weird guts. 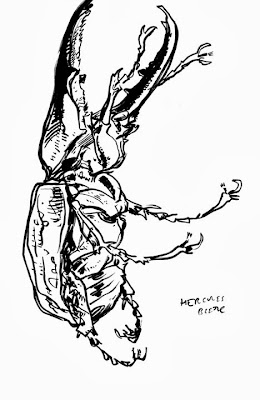 The hercules beetle is also really cool, and surprisingly furry. 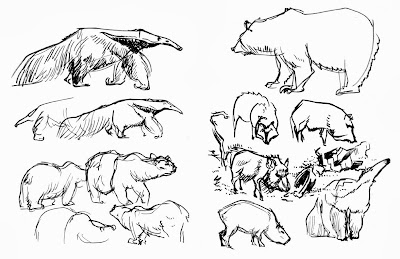 The usual favorites - anteaters, polar and grizzly bears, peccaries, and a dainty capybara. 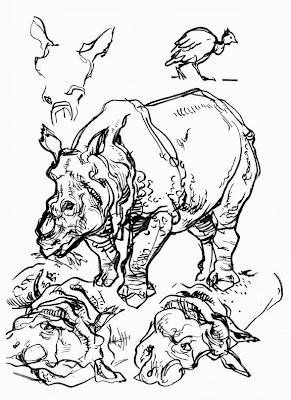 The white rhino was an unusually obliging model today. 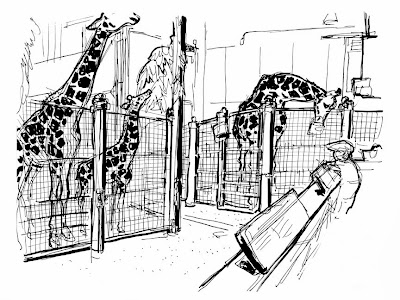 As per standard procedure, we ended the day in the giraffe house. The baby giraffe is so lively and cute!
Posted by Mark Simmons at 10:27 PM 1 comment:

Working on a long-overdue portfolio overhaul, and in the meantime I've (re)posted a bunch of my short comics stories in convenient PDF format. In the process, I realized that I've never posted the complete version of Need To Know before, so it's about time! 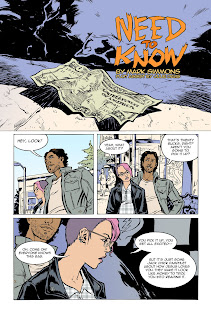 And coming up in just a couple of weeks will be a new one, the long-awaited Ouroboros.
Posted by Mark Simmons at 12:21 PM No comments:

This weekend, wife Julie and I finally got around to checking out the San Francisco Shakespeare Festival's Free Shakespeare in the Park. This summer's production was the infamous Macbeth, which I documented with a few pages of sketchbook drawings. (The colors were added later.)

All dialogue transcription errors are, naturally, the fault of the artist rather than the performers! 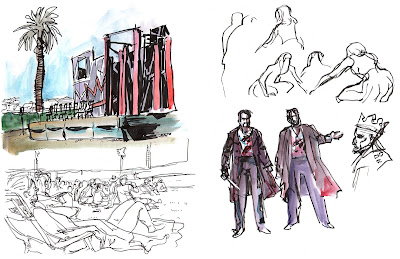 The simple, somewhat German Expressionist stage was set up on the central lawn of the Presidio. 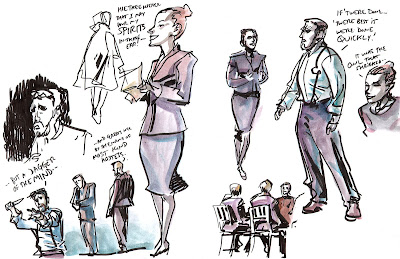 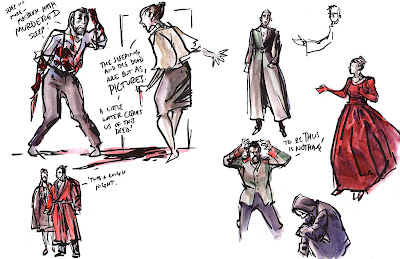 A selection of the modern-day costumes. I liked the masked, hoodie-wearing Murtherers - a nice visual! 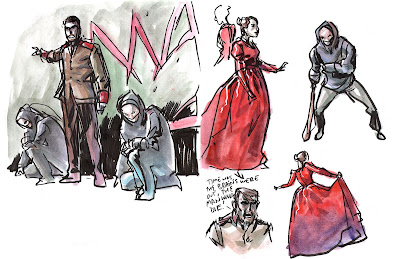 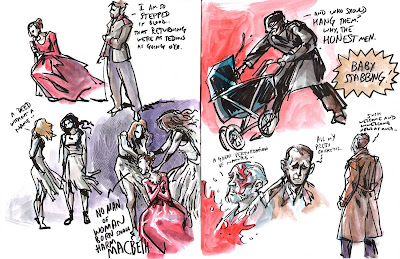 Ryan Tasker gave us a heartrendingly bereaved Macduff. Some interesting choices with the assignment of the dialogue, too. Towards the end, the ghosts played the parts of the minor characters like doctors and retainers... 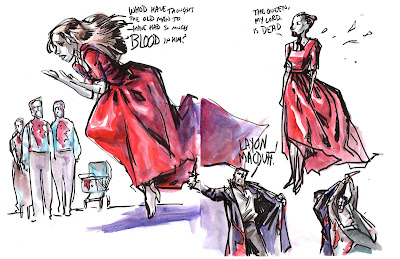 ...which gave Lady Macbeth the opportunity to announce her own death. Then it's all over but the final duel!

Posted by Mark Simmons at 11:56 AM No comments:

What I've Been Doing, Part 2

It's been a while since the public reading of the "graphic opera" Gesualdo, Prince of Madness, which I talked about in this post. But animation-meister Sony Green just compiled a trailer video based on the preview production, which you can now ogle on Vimeo... 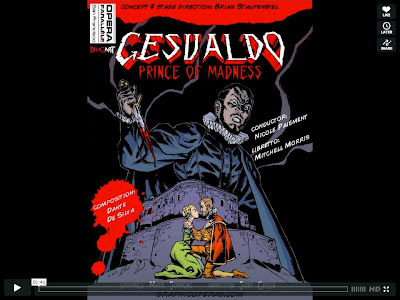 Like the warning says, it's full of sex and violence and blood and cross-dressing. You know, opera stuff! So watch with caution.
Posted by Mark Simmons at 2:16 PM No comments:

I'm no longer teaching at the Academy of Art, but I crashed this weekend's Costume Carnival anyway. This time, Sarafina and friends went with a fairytale theme, so we had lots of knights and wizards and princesses and jesters. 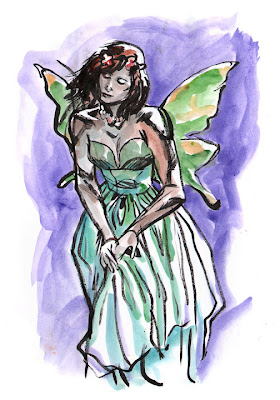 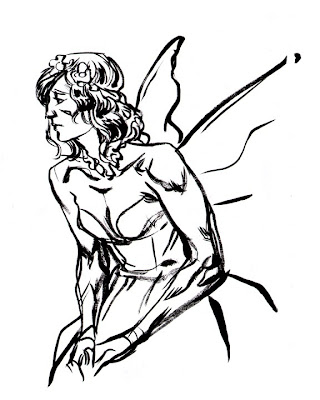 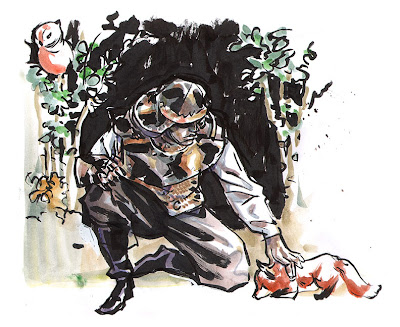 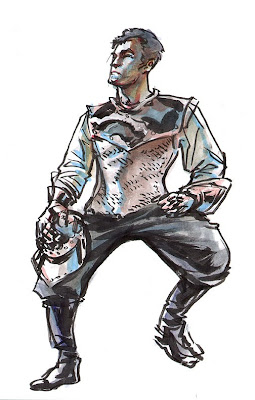 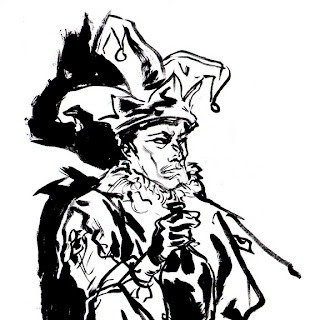 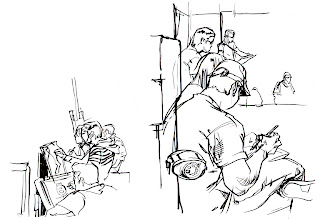 Posted by Mark Simmons at 2:15 PM No comments:

What I've Been Doing, Part 1

It's been a while since I posted stuff here, but I've been hard at work on all manner of secret projects that I can't show to people just yet. Just to tease and tantalize you, I'll share a couple of things that have actually been released by my clients...

First, I'm designing a whole bunch of robots and vehicles for the upcoming Mekton Zero roleplaying game. Game designer Mike Pondsmith has previewed some early concept sketches on the game's Kickstarter page, including some cute civilian robots and a "close combat type" with a giant transforming butterfly knife. 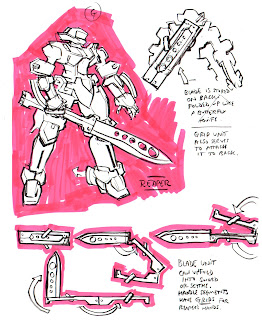 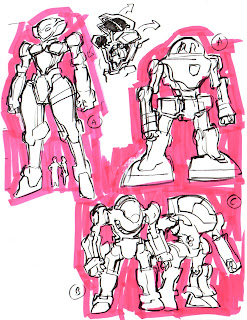 Mekton Zero and all artwork copyright R.Talsorian Games, naturally!
Posted by Mark Simmons at 9:36 AM 5 comments: