Couldn't resist whipping up a quick sketchy-painty illustration to celebrate the final 24 hours of the Mekton Zero kickstarter. At this point, full color is a go, and we're just waiting to see if the project's wonderful and generous backers can scrape together enough extra dosh to make it a hard-cover... 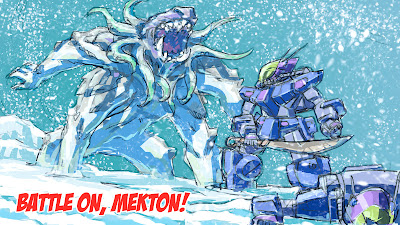 I asked Mike "Mister Mekton" Pondsmith if he had any suggestions for a scene, and he proposed a monster-versus-robot battle, possibly featuring a Gunfark (which is a giant two-headed lizard). The idea of stealing a march on Pacific Rim sounded great, but I thought I might try a different classic Mekton, the vaguely-described Uru Killer.

While I was waiting for anatomical guidance from Mike, I started sketching up a kind of polar bear/shark/gorilla monster. Then Mike wrote back to tell me the Uru Killer was "like a bear with a shark mouth," plus six legs and neck tentacles. Truly an eerie coincidence!
Posted by Mark Simmons at 12:07 PM 1 comment:

So before it's too late, I should also mention that I'm involved in an ongoing Kickstarter funding drive! Mike Pondsmith and the nice people at R.Talsorian Games are raising funds for a new edition of the anime-inspired giant robot role-playing game Mekton, with the new edition bearing the moniker Mekton Zero. So here's the Mekton Zero Kickstarter page. 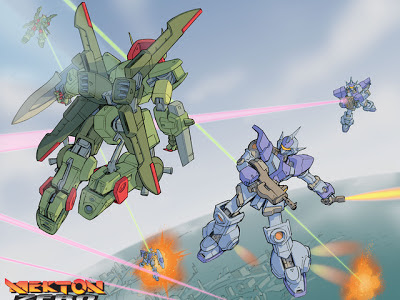 At the moment, they're well past their original funding goal, but if they can round up another $4,000 and change then they're going to print the rulebook in full color. Which would be nice for me, because I'm slated to do a bunch of the artwork, including the robot designs!

Speaking of which, this project's given me the opportunity to redesign the humongous Excalibur--one of the robots featured in the second edition of the rulebook way back in the 20th century, with an accompanying illustration by a young and foolish Mark Simmons. Now that I'm old and foolish, it's been a real kick giving this classic 'bot a full-color makeover. I prepared two versions of the Excalibur's color scheme, and the editors eventually went with the gold-based one suggested by my wife Julie. But for your amusement, here's the rejected alternate, in sinister purple hues. 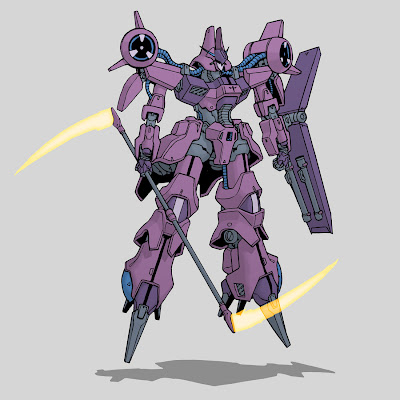 Posted by Mark Simmons at 8:55 PM No comments:

I think this was probably the most intense working experience of my life! Last night was the first public reading of Gesualdo, Prince of Madness, a new opera being developed by San Francisco's Opera Parallèle. The performance was accompanied by a full-length motion comic, with artwork by yours truly and animation by Brag Art's Sony Green. 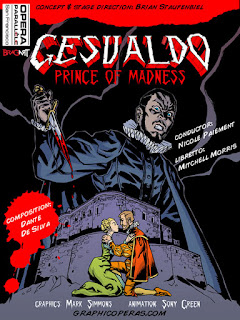 The opera's based on the true story of a late-Renaissance scandal, full of sex and blood and flagellation and late-night madrigal playing. So we pulled out all the stops in the comic version, enhanced by Sony's animation and a specialized musical instrument known as the "slap stick" that produces whip-cracking sound effects.

Here's some character artwork in progress. 26 multi-panel pages, each with multiple poses for the animated figures, which together covered 45 pages of 11x17" Bristol board. My awesome wife Julie came to the rescue by adding in the flat colors as I worked. 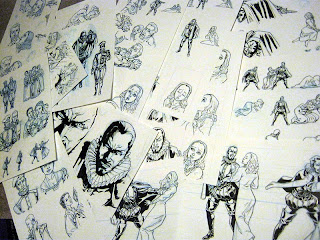 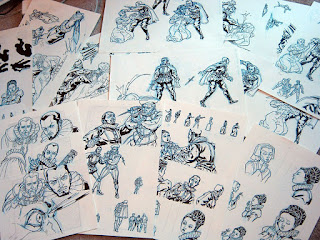 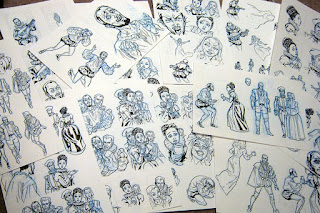 By the time I was done with that, I only had three days left to draw all the backgrounds, delivering the final pieces to Sony barely a hour before showtime. Here's a selection of these. 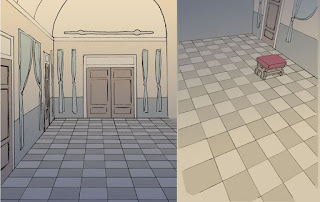 There was a pretty good turnout for the reading - over a hundred opera-goers, and I'm pretty sure none of them knew what to expect. 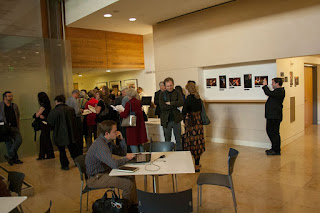 Does this look like a man who's been awake for three straight days? 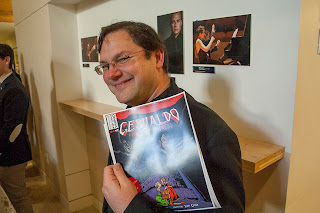 Conductor Nicole Paiement sets up the performers. (That giant lute is known as a theorbo.) During the performance, the accompanying motion comic pages were projected on the wall above them, kind of like those Rocky Horror Picture Show re-enactments. 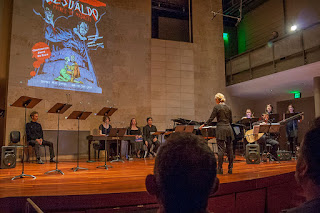 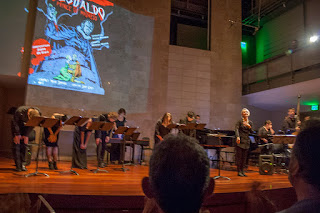 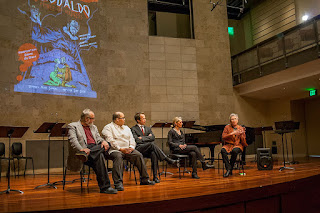 As a bonus, here's the hitherto-unseen final frame from the last page, which didn't play during the reading due to some kind of technical glitch. This is pretty much how Sony and I were feeling at the end of the week, but I'm sure we'd leap at the chance to do it all again! 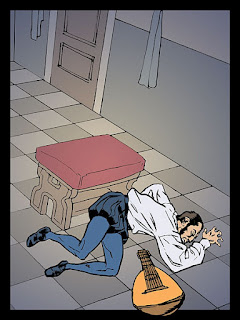 Posted by Mark Simmons at 5:32 PM No comments: