And now, some straight-up Pacific Rim fan art, created for a "design a Jaeger" drawing challenge hosted by the AAU Comic Book Club. Since we're meant to represent for our homelands, here's a British monster-slaying robot named after a line from a William Blake poem. 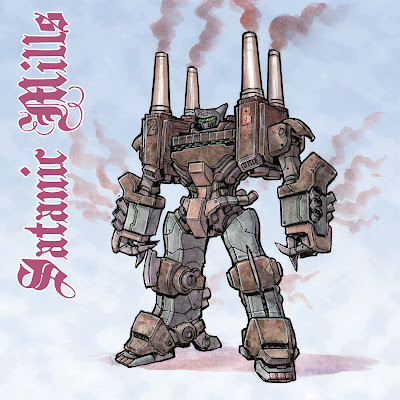 Since Britain is nowhere near the Pacific, I figure they'd just slap something together in the name of global citizenship, then freeze the funding and scrap the whole thing at the last minute. But if we want it to look a little bit cooler, here's what happens when we stretch out the legs... 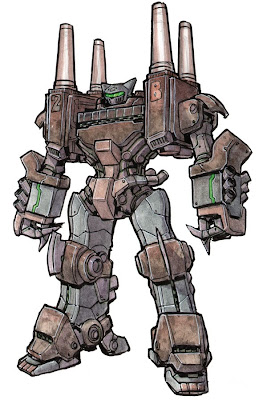 Posted by Mark Simmons at 1:53 AM No comments:

Once again, we have Pokemon-style powerups of the previous kaiju tag team. 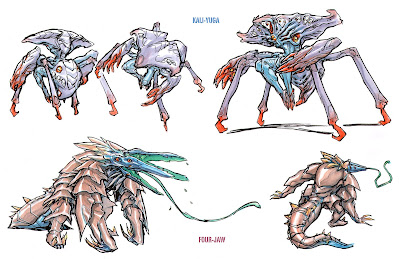 Kali-Yuga now sports a nice protective carapace and a couple of big old claws, making it a bit more formidable in battle (and a lot more complicated to draw). Four-Jaw has a slightly redundant moniker, since the original Rat-Catcher already had a four-part jaw, but it's more noticeable now that its head is so much bigger. Incidentally, I'm pretty fond of those overhead views, which I think of as the news helicopter POV.

And once more to the scale comparison, which is getting a little crowded! Wow, Four-Jaw is pretty massive.
Posted by Mark Simmons at 7:44 PM No comments:

Round three of the kaiju party! Here’s another monster tag-team. 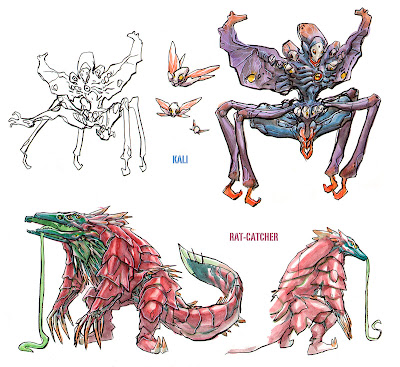 Once again, we have a tactical division of labor. Kali is designed to scout out the area and hunt down targets with its remote-controlled drones. Then Rat-Catcher slurps up the puny humans with its sticky acidic tongue. Yum!

And an updated scale comparison. Ideally, it would be nice if these could all be portrayed by the same size of stuntman in a rubber suit, but as we see in GMK (AKA Giant Monsters All-Out Attack) you can kind of "cheat" that visually if you need to.
Posted by Mark Simmons at 10:31 AM No comments: 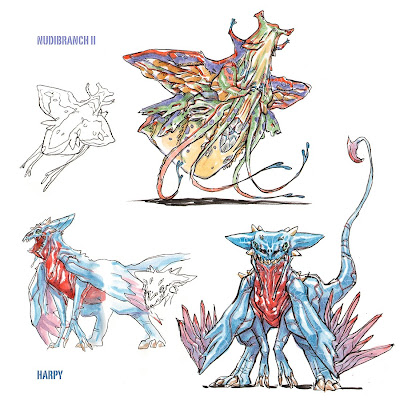 Here’s a Pokemon-style evolution of the previous kaiju. Nudibranch II now has aerial mobility, while Harpy is a simple power-up of the feisty Rooster.

And while we're at it, how about a scale comparison? Wow, Nudibranch II is huge!
Posted by Mark Simmons at 10:07 AM No comments: 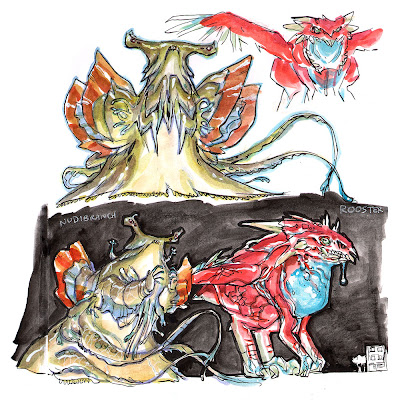 Here are today's sketchbook monsters. I like the idea of kaiju being designed as living weapons, so I'm trying to think about this a bit strategically. Here, Nudibranch is a toxic polluter who poisons rivers and poops noxious gas; Rooster is its escort, who wards off human defenders with his flappy blade wings and sonic screech. Perhaps these beasts would evolve like Pokemon in response to enemy tactics...
Posted by Mark Simmons at 11:15 AM No comments:

Here are a couple of recent bits and pieces. First, a fan art illo I did for Ben Jelter's upcoming comic Moscow 38, which is heading into the final two days of a Kickstarter funding drive. At the moment, Ben's netted enough to cover printing and the addition of extra production art and guest illustrations; his next "stretch goal" is to add a bunch of character epilogues and side stories, so we'll see what happens. 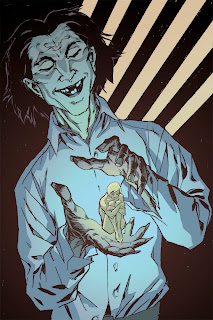 Meanwhile, I've been substitute-teaching a comics class for a local summer program aimed at middle- and high-schoolers. Here's a handout I did for them; as you can see, we're very much at a beginner level art-wise. 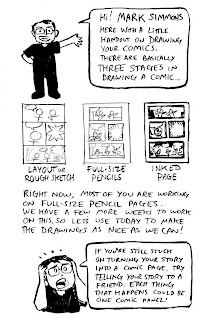 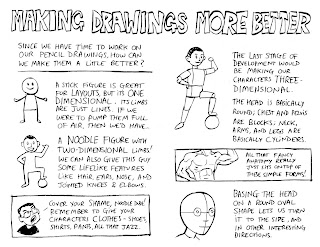 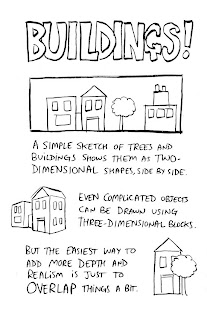 And finally, I drew this improbable monster while Julie and I were waiting for a preview screening of Pacific Rim. It obviously wouldn't work as a giant kaiju due to its flimsy legs, but if it were about the size of a small dog, I imagine it could bite your leg something fierce. 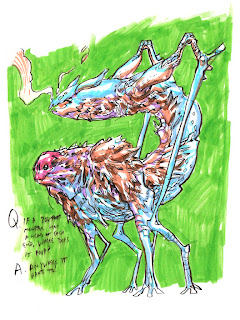 Posted by Mark Simmons at 12:42 PM No comments: