Since I posted the roughs for my next batch of tarot cards, I've been following with keen interest the followup discussion on the Aeclectic Tarot forums. (Should I link directly to the thread, or would that be kinda vain?) Some people have expressed a preference for the loose sketches over the more polished final artwork, and it occurs to me that it wouldn't be hard to provide two versions, given my current working method. Let me explain...

When I created the original three cards, a little more than a year ago, I started out with detailed pencil sketches and then scanned them into Photoshop. Then I blurred the original pencil drawings, applied a layer of transparent colors, and threw on a few opaque highlights. (I also moved or resized a couple of elements along the way.) The results were pretty rough - more so than the original pencil drawings - but they made a good basis for building up the final painted versions, and I've used the same method for pretty much all my digital painting work ever since. 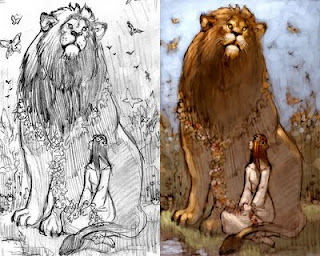 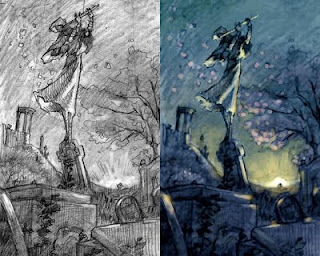 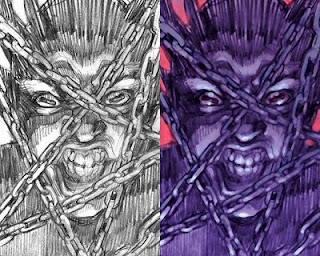 If you compare with the finished versions, you'll see that I made a lot of changes in the final painting (especially on the Strength card). It seems like a lot of illustrators prefer to prepare a perfect, detailed line drawing and carry it through to the final image, but this sloppier process seems to suit me, and as a side effect it means that I end up with a lot of "rough draft" artwork that I can pull out of the Photoshop files later on.

Whew! I seem to have been blogging up a storm this week, but now comes a little bit of radio silence while I head off to the New York Anime Festival to do some show coverage for Anime News Network. Time to get into the interviewing mindset...
Posted by Mark Simmons at 12:55 PM 6 comments:

Of the various projects I've dabbled in over the last couple of years, one of the most perennially popular was the handful of tarot cards I drew last year. Thanks to some recent encouragement from the lovely folks at Aeclectic Tarot, I've finally decided to revist that particular project, with an eye towards completing the full set. To start things off, here are rough sketches for the next eight cards in the set... 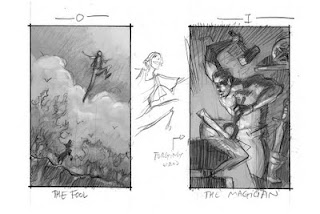 The Fool just popped into my head, and I drew it pretty much as it first occurred to me. The Magician is something of a departure from the classic magus-slash-charlatan, but he's supposed to represent the artisan and the master craftsman too... 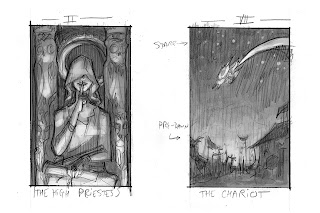 The High Priestess is inspired in part by the famous Burney Relief, hence the lions and owls on the columns. The Chariot is blazing through the heavens over an army encampment; in hoc signo vinces, indeed. 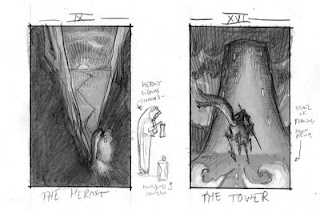 The Hermit is another one that popped into my head exactly as you see it here. The Tower departs considerably from the classic image, with more than a little of Browning's Childe Roland mixed in. Is this a calamity for the knight, the tower, or both? 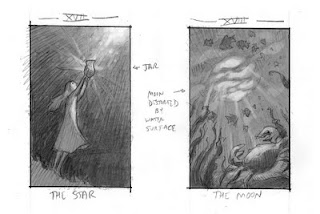 The Star changed dramatically as I worked on it. My first impulse was something along the lines of Gustav Klimt's Danaë, but I think this version is much better at conveying the idea of capturing inspiration. The Moon is depicted as an underwater scene on the grounds that, as a symbol of illusion and confusion, it shouldn't be directly visible. And besides, the crab is so cute!
Posted by Mark Simmons at 3:41 PM 11 comments:

Another character from my little fantasy project: the invisible vampire ninja knight Garlon, brother and spymaster of the dreaded King of the West. 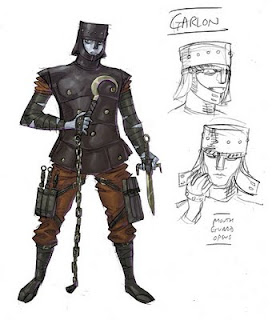 Posted by Mark Simmons at 5:11 PM No comments:

I've been working on another set of Tarot card images, one of which is an oblique reference to Don Quixote. At this point my wife reminded me about a project I worked on for one of my illustration classes, a group project that fizzled out before it had really gone anywhere. I generally don't like posting older work, but even though these sketches are a couple of years old, they're still pretty cute. Perhaps I'll revisit La Mancha's famous old crackpot some day. 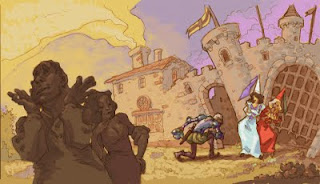 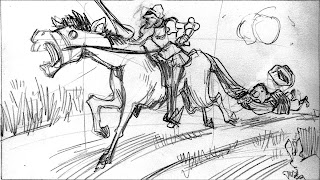 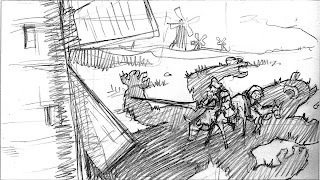 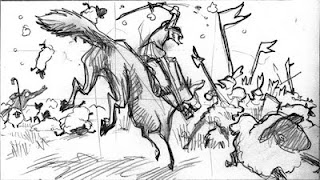 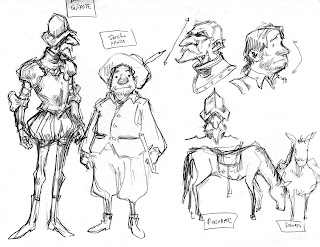 Posted by Mark Simmons at 7:00 PM No comments:

More from the ooh, edgy, so so very dark fantasy project: Labraid of the Red Hand, war chieftain of the Fomorii. He actually developed a substantial back story while I was working on him, but the starting image was a rusty suit of armor with a hermit crab living in its helmet. 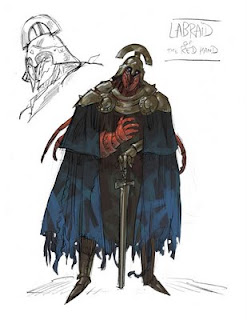 Still on an interminable treadmill of doing samples, sending them away into the ether, and waiting to see what happens. Hopefully I'll clear out the backlog this week, but in the meantime, here's a bit of time-wasting for you.

For some reason, last night I was pondering the Further Adventures of the Frankenstein Monster. Not the lumbering, virtually mute Universal movie version, but Mary Shelley's hyper-erudite, angst-ridden original, who's basically an eight-foot Goth who cannot die. What would he be doing if he were still around today? Well, if he were speed-dating, driving to work in a tiny clown car, and rooming with the Gill-Man and the Mummy, it might make a pretty entertaining web-comic. 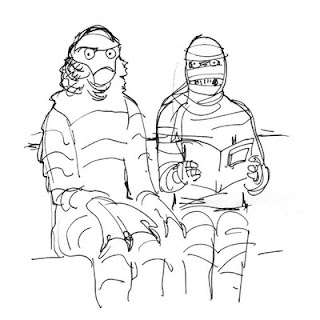 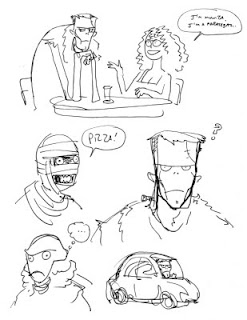 Posted by Mark Simmons at 10:05 AM No comments: