It's been a while since I posted zoo drawings, so let's catch up. The month of November was kind of overshadowed by the very sad accidental death of Kabibe, the SF Zoo's baby gorilla, and I didn't really have the heart to go sketching for a while. I did do a little tribute drawing for the impromptu memorial shrine, though, showing Kabibe with her doting grandmother Bawang. 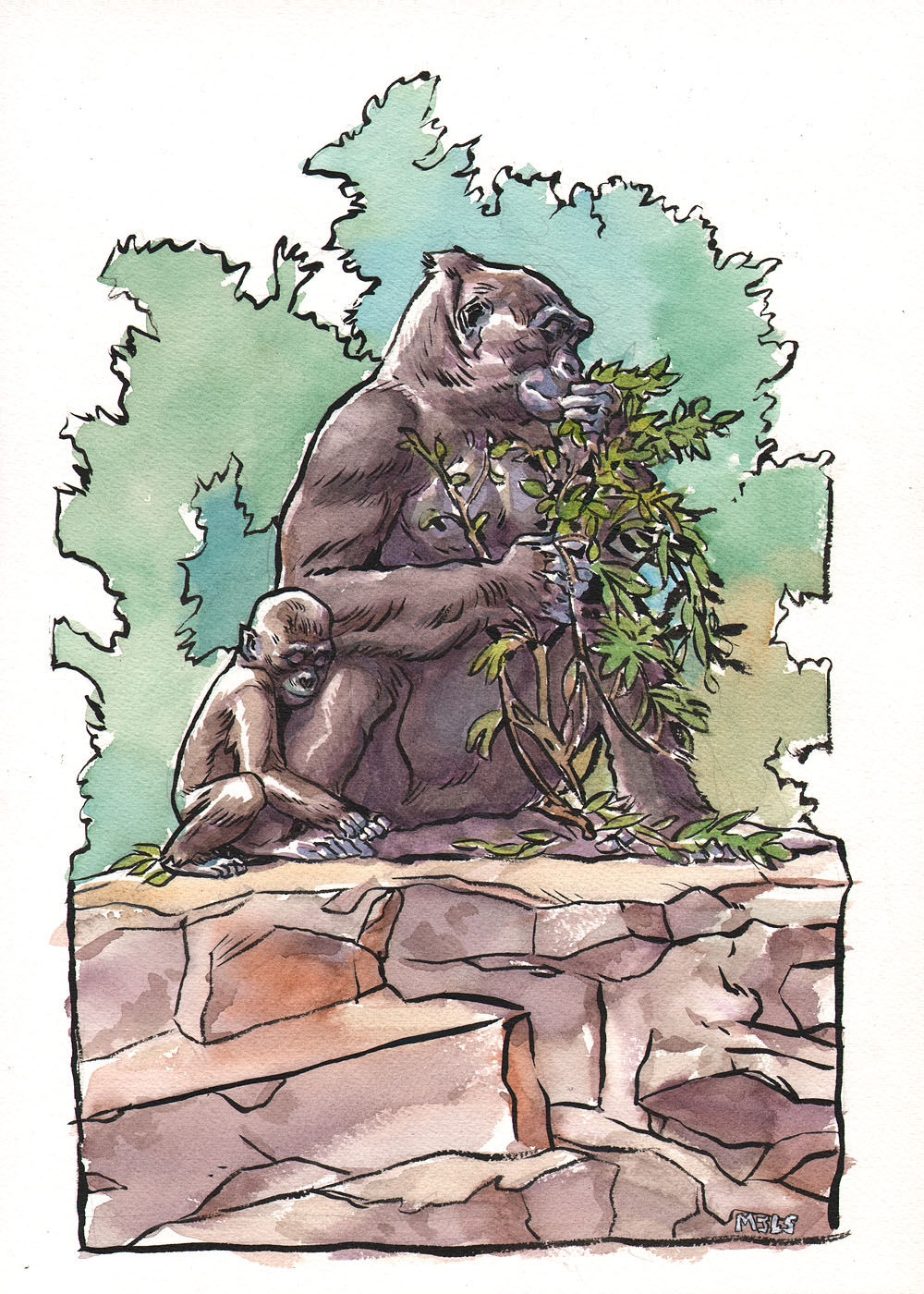 Going back a little further, here are some drawings from November 8. 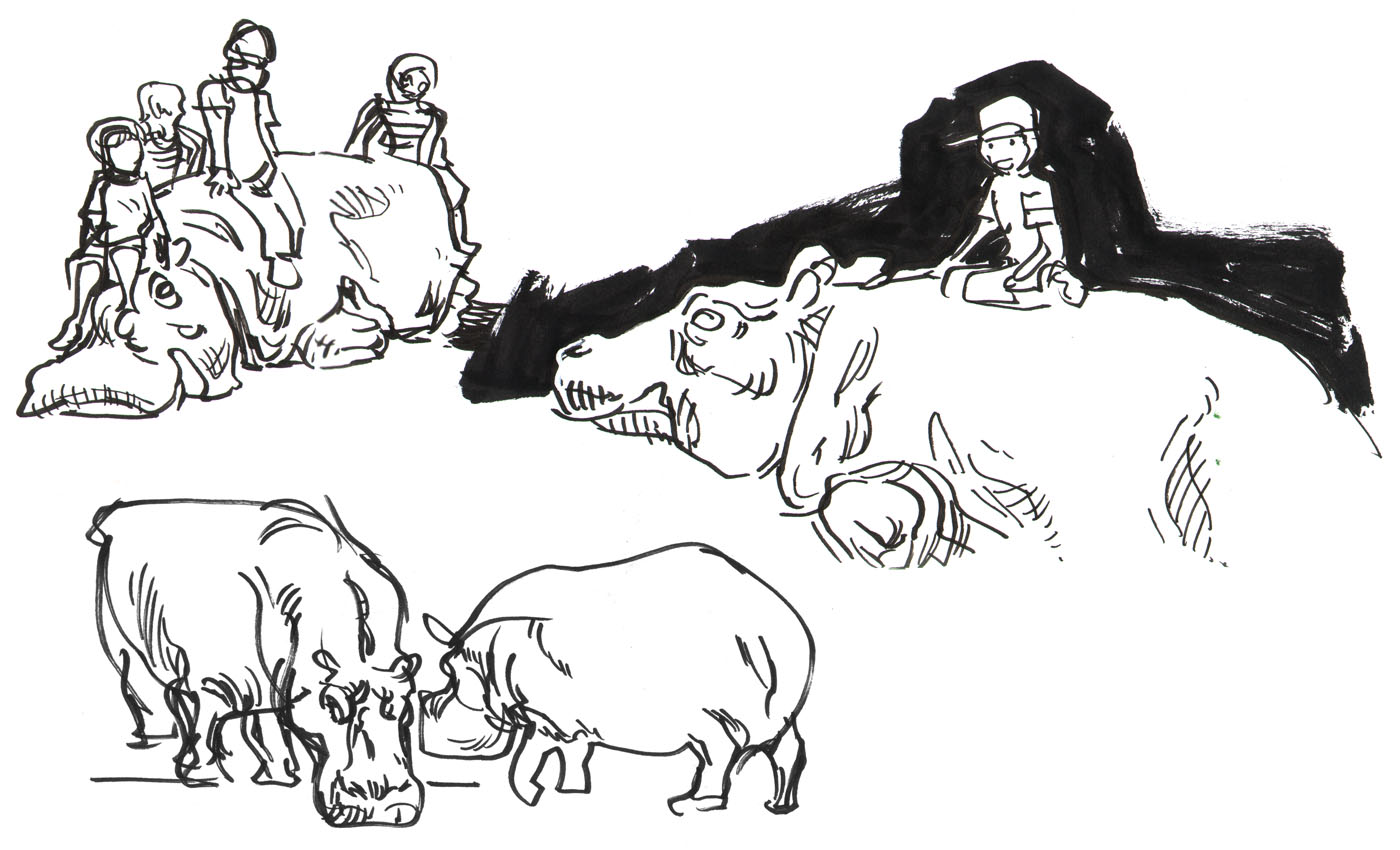 While I was tagging along with a friend and his daughter, I sketched the climb-able hippo sculpture, and subsequently Brian the actual hippo. 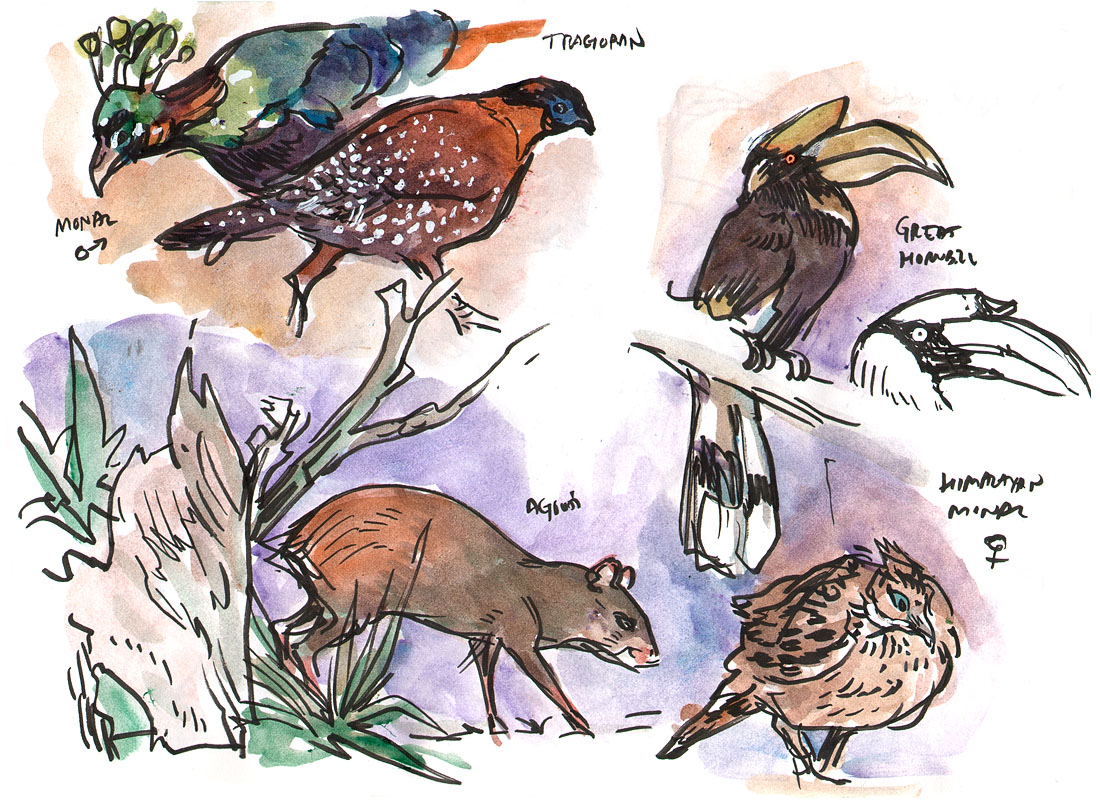 Some pretty birds from the aviary, and one of the newly arrived agoutis.

Naturally I went by the ARC for the daily Animal Encounter. Louie the common green iguana was posing very nicely. 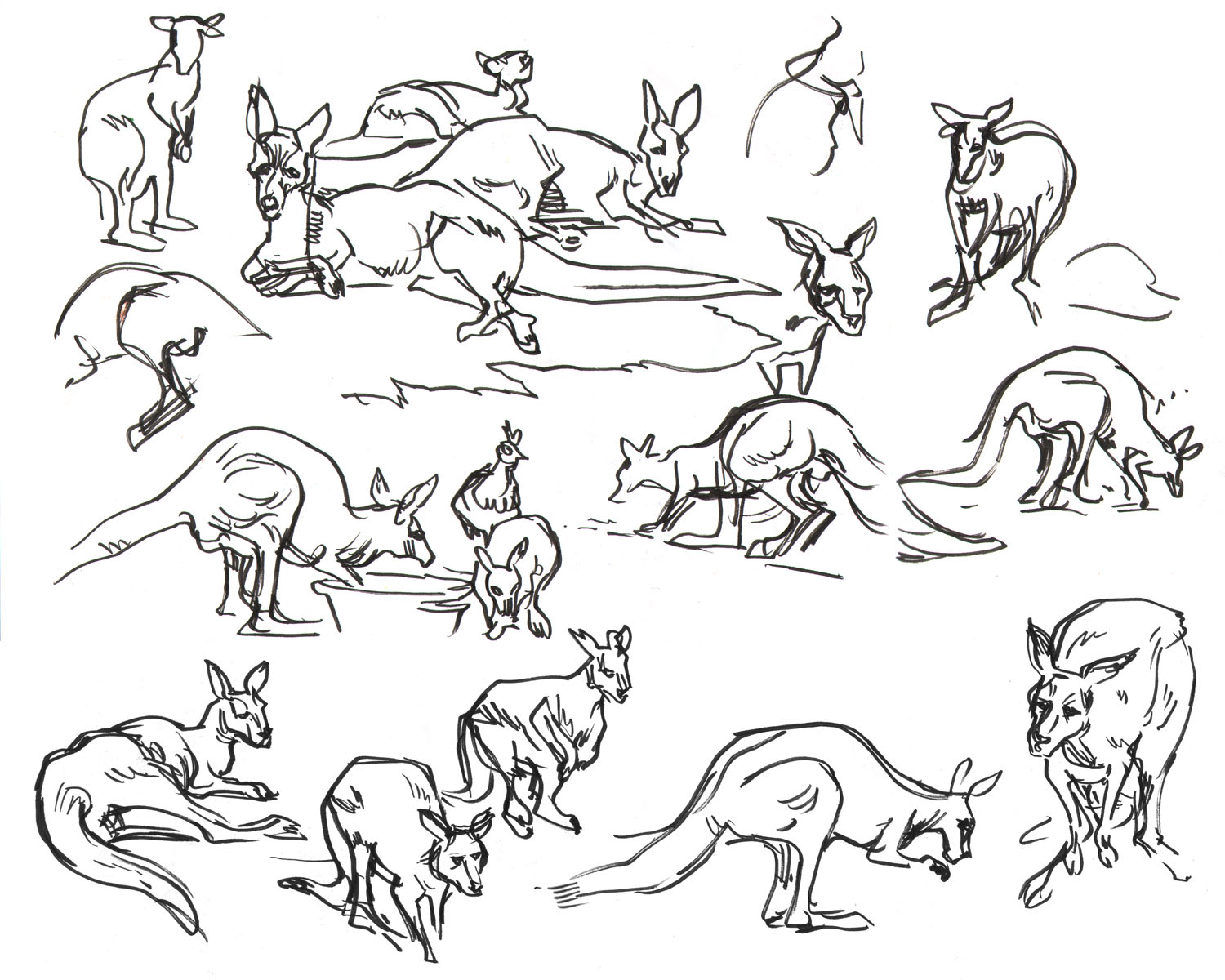 My first serious attempt to draw the kangaroos and wallabies. I had to do a lot of warmup sketches. 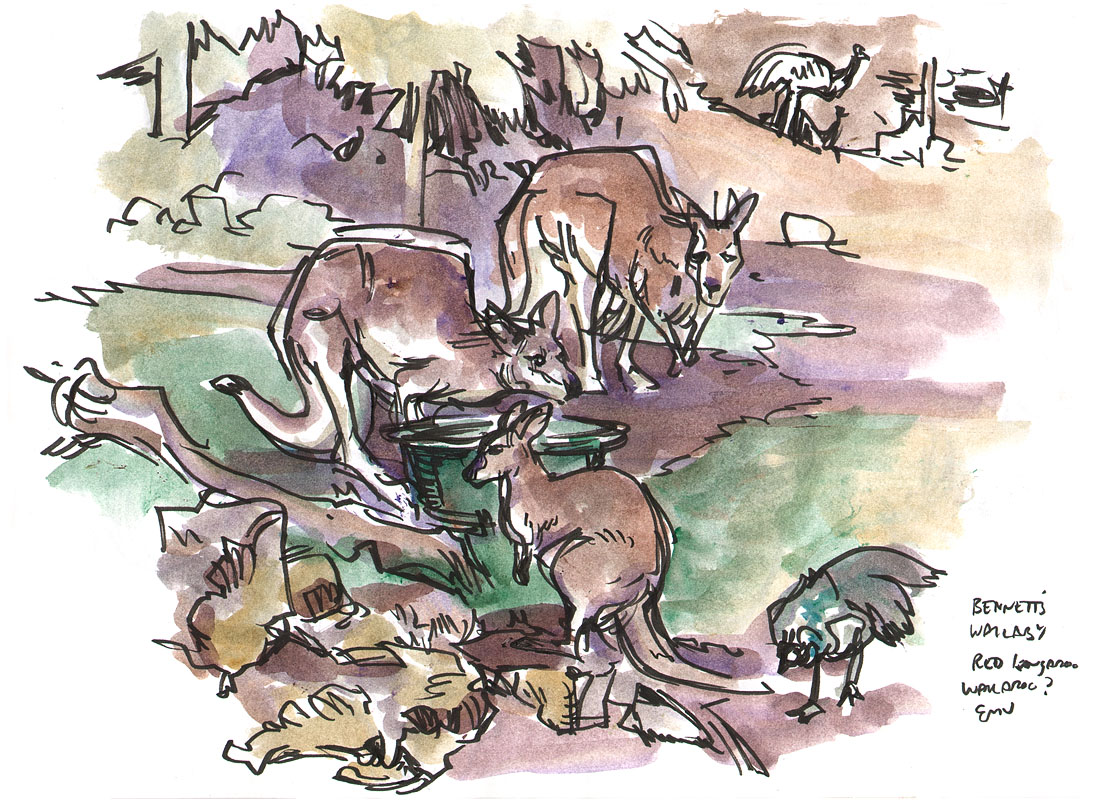 And here's a color scene, with background emu. 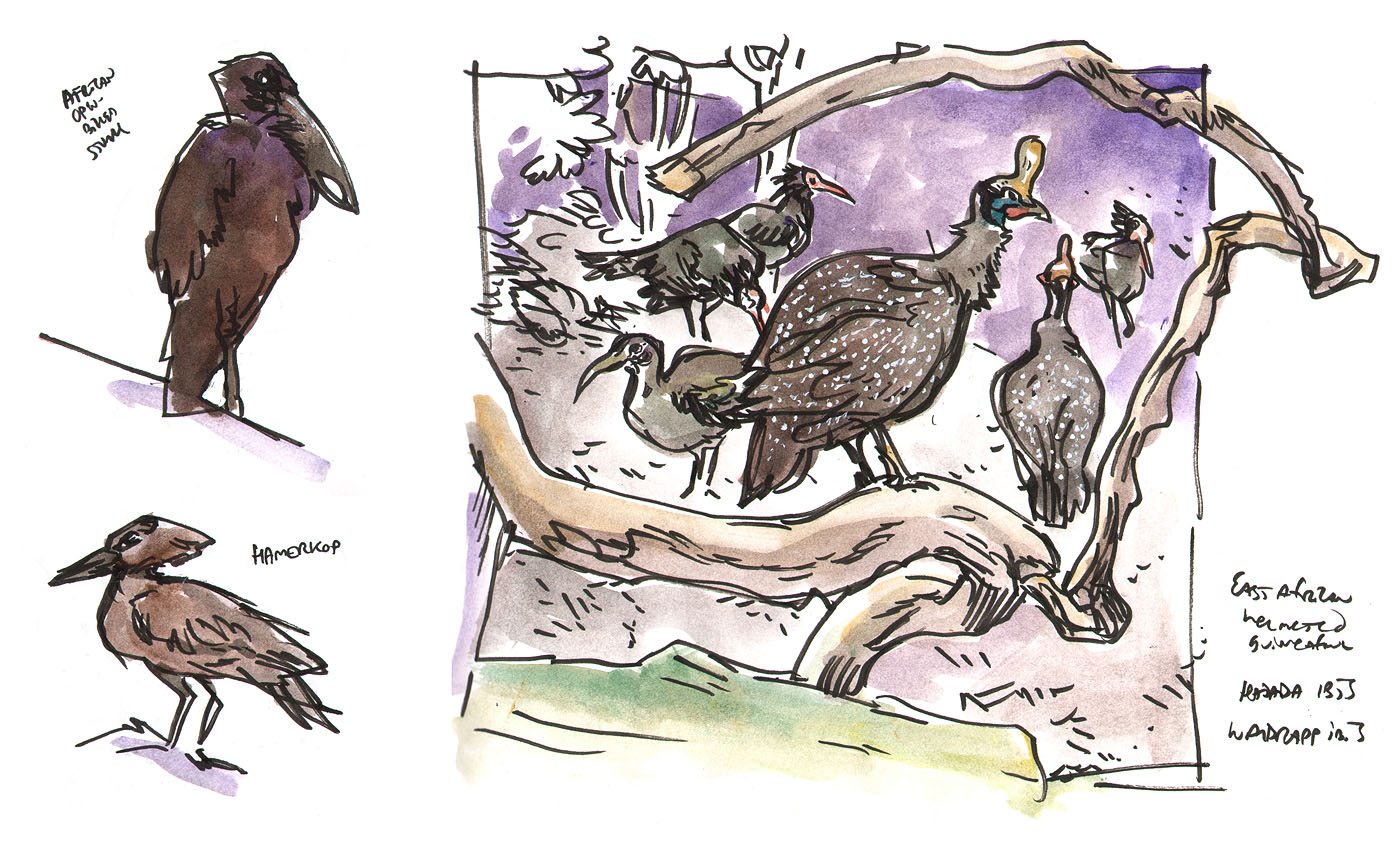 Lastly, a selection from the little-known African Aviary. The zoo closed on me while I was still putting in the guineafowl's speckles.

Later in the month, I came back for World Anteater Day, which is apparently November 29. 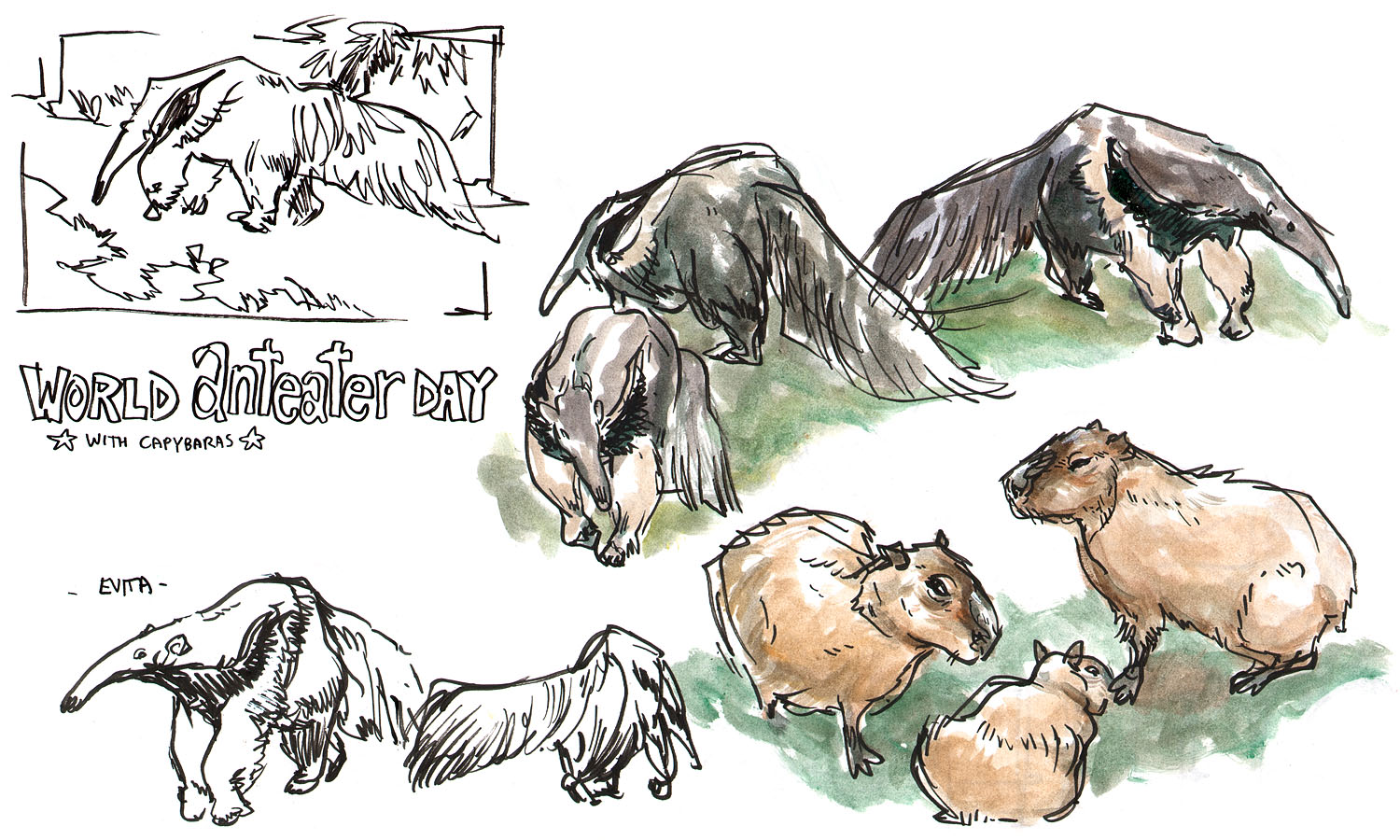 A few sketches of Evita the giant anteater, plus a nearby capybara. 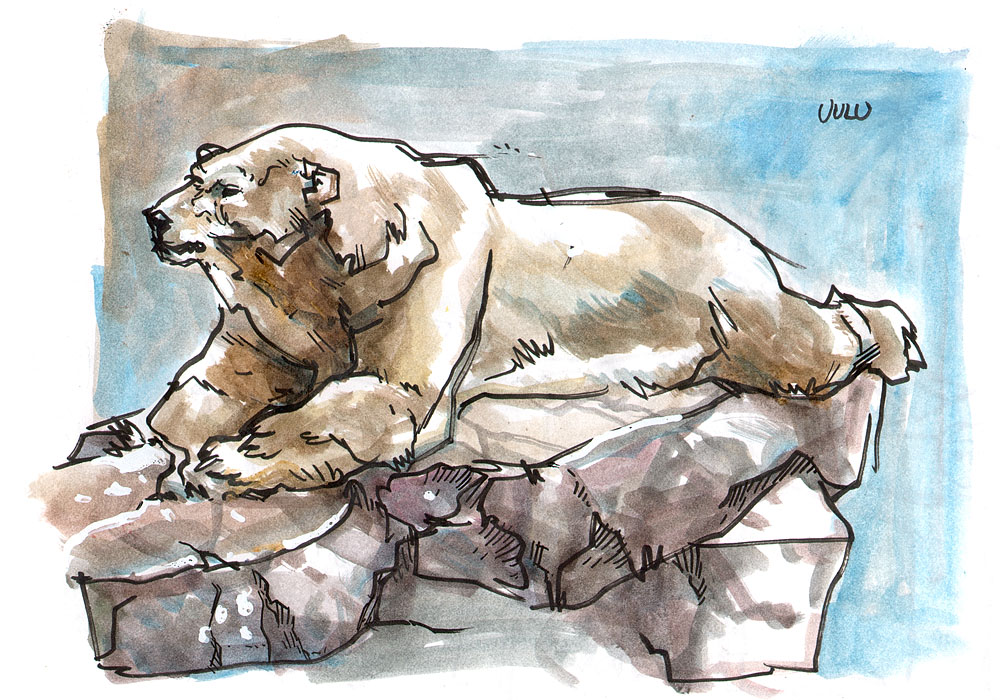 Uulu the polar bear was kind enough to pose for me. 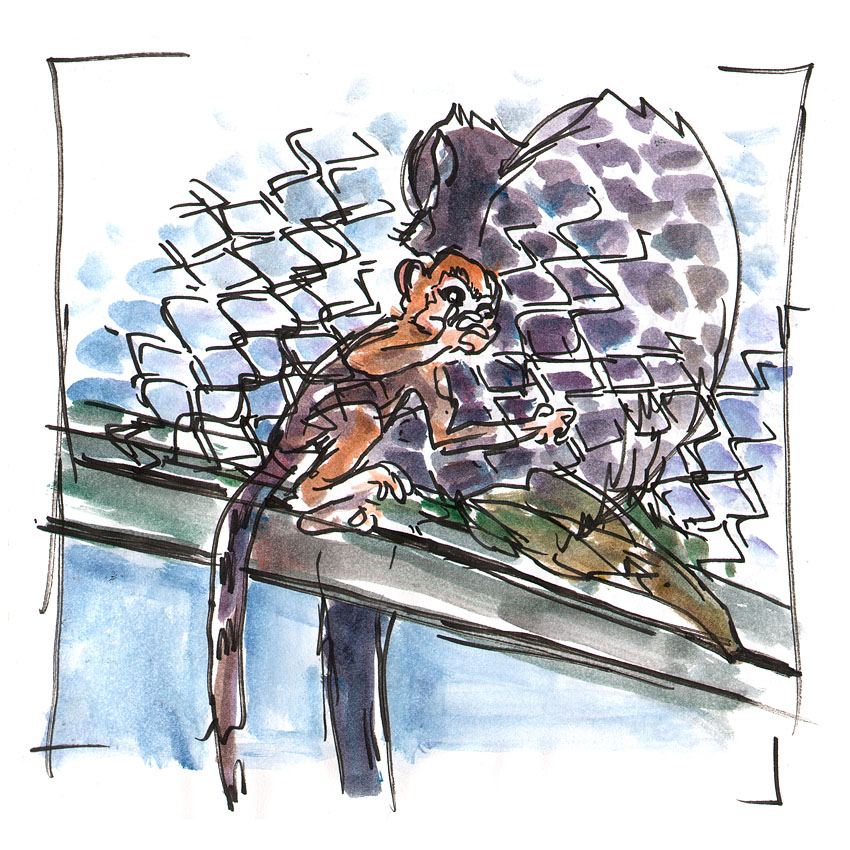 The baby Francois' langur, now 17 days old, is starting to toddle around on his own unsteady feet.

And most recently, here are a few from December 4. 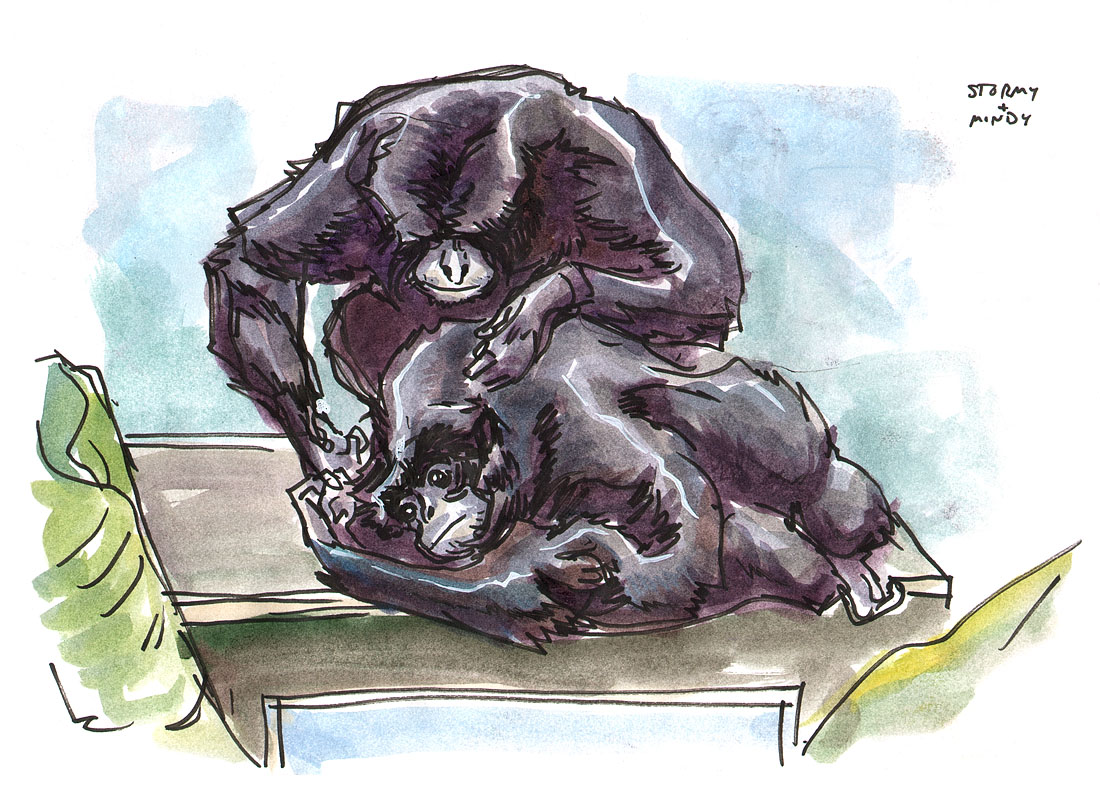 The siamangs are such a cute couple. Some days I want to run away and become a gibbon, too. 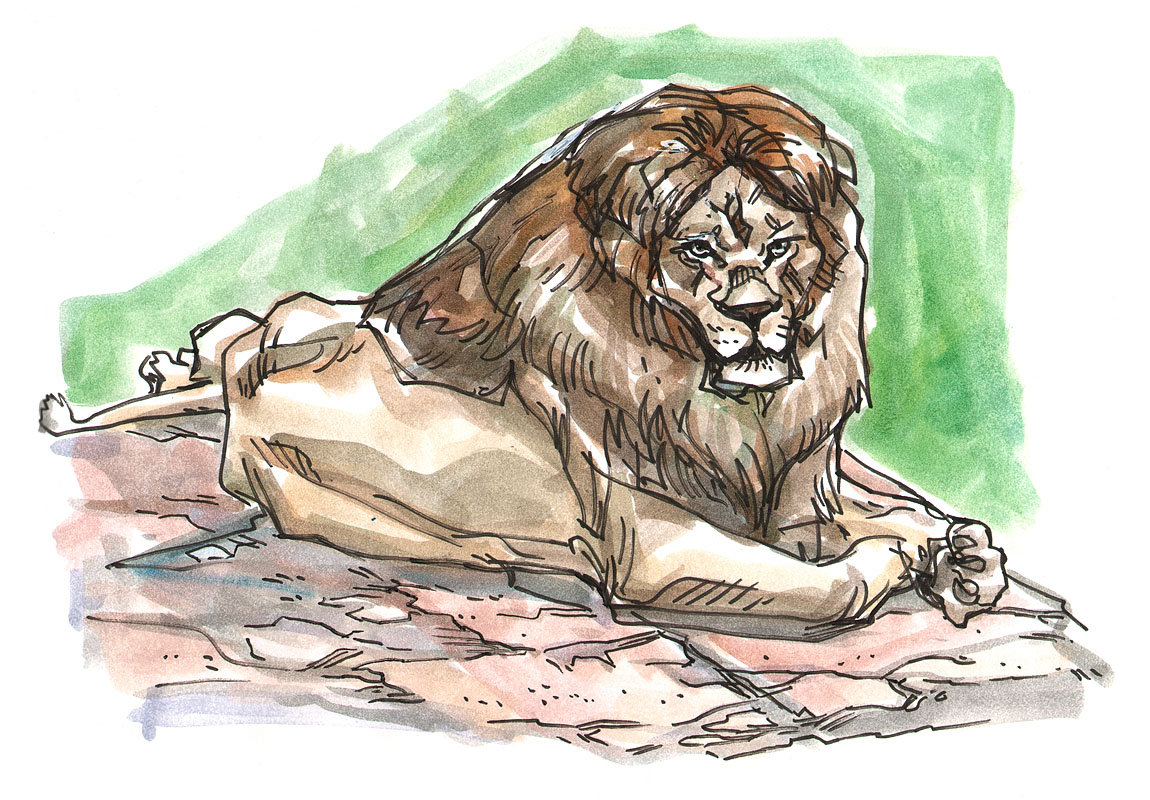 Jahari the lion posing magnificently. I'm not liking the blotchiness of the background paint - I just ordered a bunch of new "Art Alternatives" brand sketchbooks, which have slightly better paper quality. 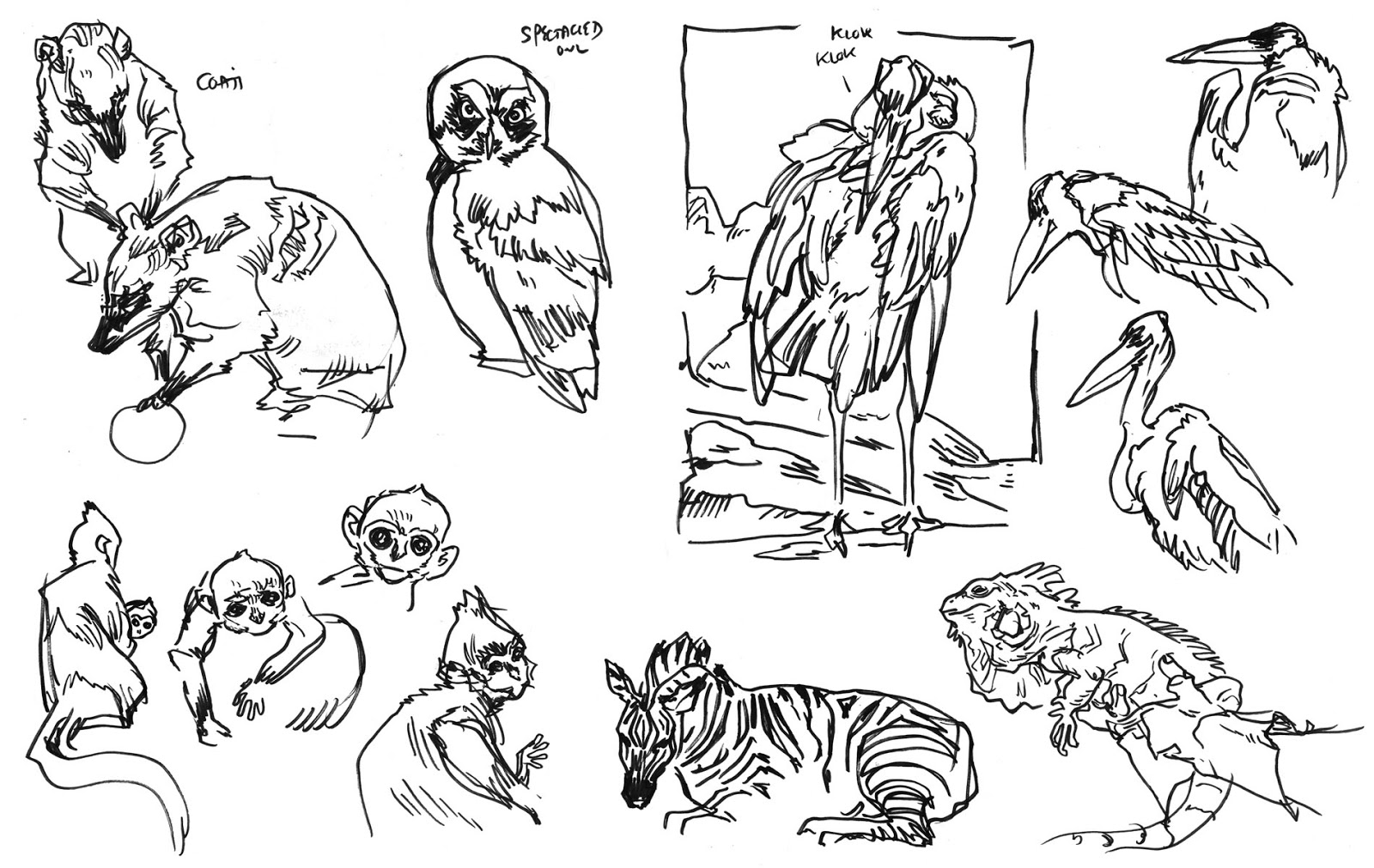 I ended up doing a lot of quick pen-and-ink doodles today. Here are a few of my favorites. 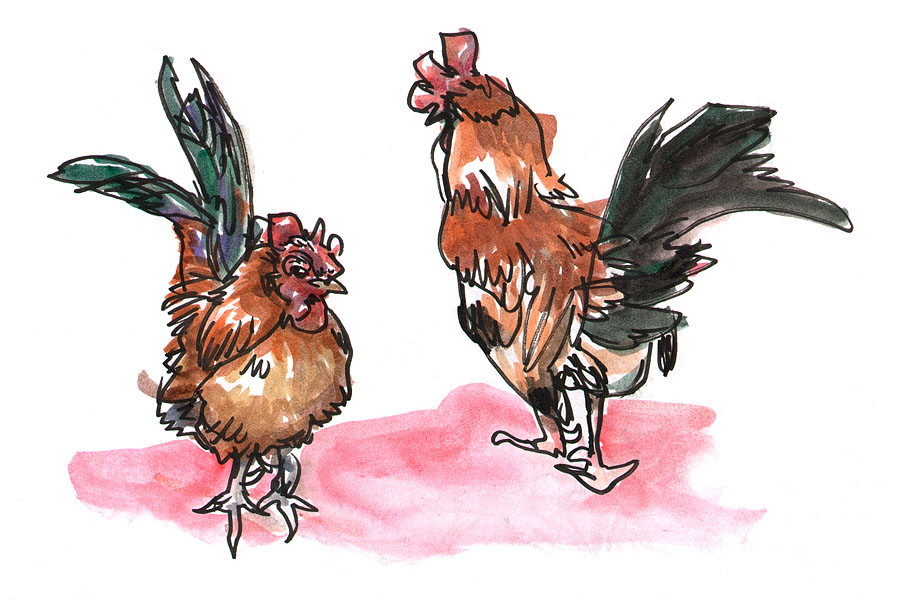 And this one's for my wife Julie, who requested a chicken.
Posted by Mark Simmons at 11:02 PM No comments: