These are from a Saturday workshop hosted by the Academy of Art's Illustration department. The idea was for the faculty to get a head start before the students came flooding in, but it was mostly just me and Lisa Berrett. 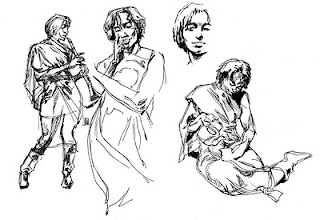 The footwear seem a bit anachronistic, and strictly speaking I should have changed it up a bit, but I can never resist drawing a cool pair of boots. 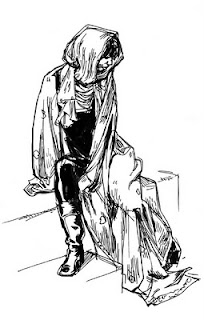 So when a horde of students showed up, I'd already been drawing for about three hours, and I think the fatigue was setting in. 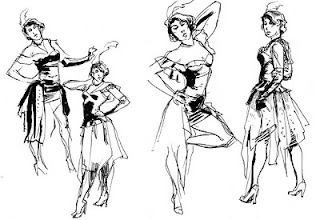 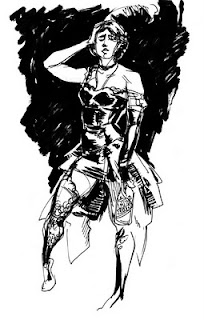 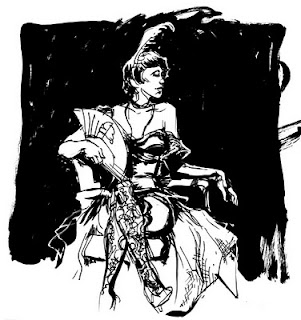 By this point Bill Sanchez was gently correcting my hand anatomy, which I took as my cue to pack it in for the day. :-) 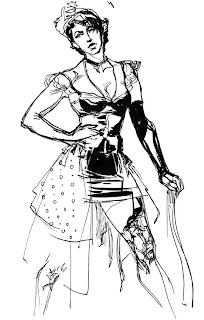 Some drawings from the occasional workshop hosted by Omari Barron. This time, no model, just artists posing so other artists can draw them... 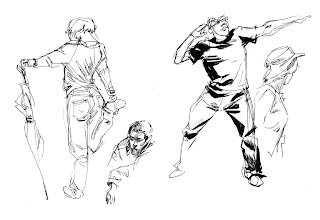 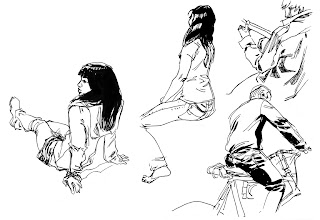 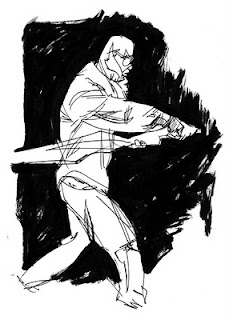 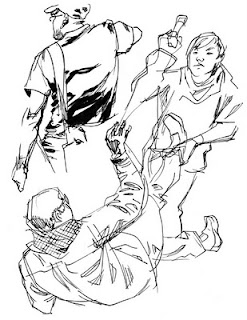 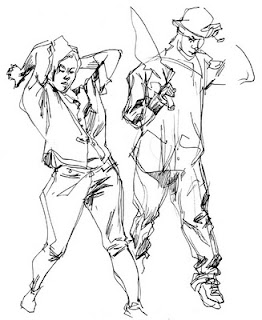 Last page of the sketchbook! Time to fit these in any way I can. 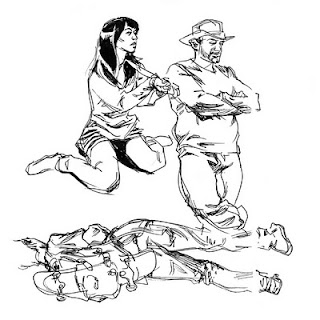 Posted by Mark Simmons at 4:49 PM No comments:

Still plugging away on these. First, sketches for Tiram, who's managed to lose those humongous force field widgets on his butt. Perhaps these could be optional add-ons.

With that taken care of, we can start playing with colors for these two. 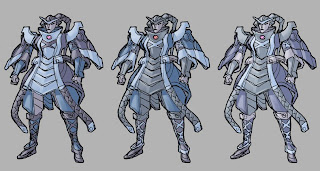 So now the lineup is starting to look something like this. From here on, I think the main task is going to be making these guys look like they belong in the same story. That may come down to the balance of curvy and boxy shapes... 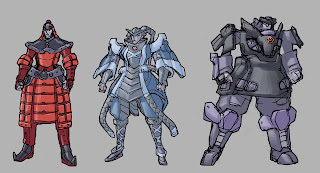 To mark the release of Fraggle Rock Vol.2 #1, a comic anthology which includes a short story written by Jake Forbes and drawn by me, here's a little bonus extra. These are the character and set drawings that I submitted to Archaia Studios and the Jim Henson Company when I was auditioning for the job. 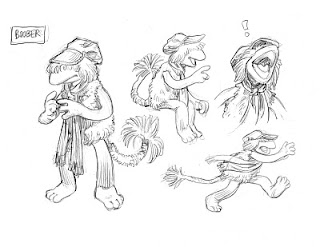 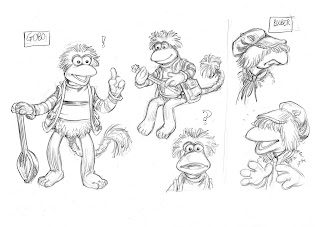 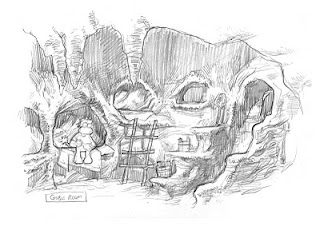 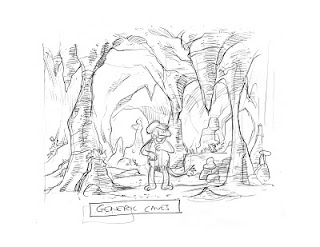 If you're interested in this sort of thing, Cory Godbey, who illustrated another story in this issue, has posted his own audition samples. Lovely drawings, and his finished pages are gorgeous! Check 'em out!

Speaking of exceptionally talented comic artists: I'll throw in another plug for the awesome Rahsan Ekedal by noting that the second issue of Echoes comes out next week, as well as a reprint edition of the sold-out issue 1.
Posted by Mark Simmons at 9:04 PM 1 comment:

I haven't had a chance to work on these for a while, but let's seize our windows of opportunity as they present themselves. Having nailed down the silhouettes, I've been working on the interior details for my cyborg robo-knights. Lots of scribbles, details, and ideas for design gimmicks...

Which is nice, because now I can play around with color schemes. Here are a few for Lamok. Almost done with this one! 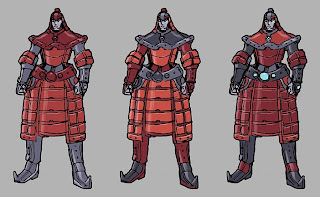 Posted by Mark Simmons at 1:50 AM No comments:

For various reasons, I've been thinking about character design recently. As a New Year's experiment, I've decided to revisit one of my long-running pet projects and see what happens if I apply a more orthodox design process to the cast of characters. If you check the King of Mars tag on this site, you can see just how long I've been fooling around with various permutations of this story idea!

In a nutshell, it's a sci-fi fantasy story which takes place thousands of years in the future on the planet Mars. As part of the back story, I've posited a glorious Golden Age in which the deserts of Mars were policed by an elite cadre of four cyborg warriors, all but one of whom have since been destroyed. These legendary guardians are based on the three great knights of the Arthurian era (as per Malory's Le Morte D'Arthur), plus the also-ran Palomides who constantly tries and fails to best Sir Tristan and join the elite top-ranked tier. Each one also corresponds to a playing card suit, and its associated Tarot suit, so ultimately they're nothing but a pack of cards.

First up is Gahad, the Lancelot analogue. He represents the suit of Diamonds/Coins and the element of Earth, and so naturally he needs to be massive and solid. In these silhouette-style thumbnails, he gets progressively more bulky and tank-like, but I wanted to leave his legs fairly mobile so he can run around and fight. His signature weapon is a hammer. 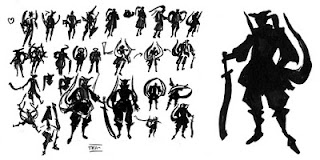 Next we have Tiram, the Tristan stand-in. As the Knight of Hearts/Cups, he represents the element of Water and has a fickle, unreliable temperament (just like his Arthurian prototype). Having envisioned him as having a flowing, unpredictable fighting style, I immediately thought of the wiggly flexible swords featured in Chinese wuxia movies, and the rest of his design followed pretty naturally from there. The crescent shapes on his back are force-field generators. 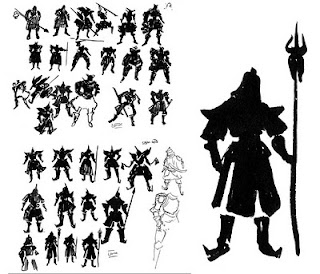 Lamok gave me fits. This character is based on Lamorak, an utterly forgotten Arthurian character whom Malory nonetheless ranks as one of the top three knights. He's the Knight of Clubs/Wands, corresponding to the element of Fire. His signature weapon is a spear, and he's an aggressive fighter who rushes into the fray of battle. I actually had an earlier design for him that I really liked, but in all honesty it was better suited to a different character, so I switched them around and started Lamok over from scratch. After several pages of dead ends, I finally looked up some traditional Korean armor designs and found they were a perfect fit for what I had in mind. Saved by research!

And finally we have Palom, templated on Palomides the Saracen. As the Knight of Spades/Swords, he represents the element of Air, and like his associated Tarot suit he's an ill-fated troublemaker who sows strife wherever he goes. As the sole survivor of the Four Knights, he's a major antagonist in the story. In this case, I simply swiped Lamok's previous design and grafted it onto Palom, since its spiky shapes are a perfect fit for the character. The only element of Palom's original design I've retained is that groovy sword.

So there's the lineup. These four knights, and their characteristic shapes, will be serving as templates for a lot of other characters in the story; you could consider them to be the Platonic ideals of their respective suits. Having nailed down workable silhouettes, I'll now get started fleshing out the design details...
Posted by Mark Simmons at 11:06 PM 4 comments:

Happy New Year, everybody! Just to get things started, let me plug a few recent works by people I know and/or owe favors to. :-)

First, Vera Greentea and Ben Jelter have published a single-issue, standalone version of their comic To Stop Dreaming of Goddesses. This was previously featured in the SIREN anthology, which is now sadly out of print.

Meanwhile, the first issue of the horror/suspense comic Echoes, from the awesome Rahsan Ekedal and the perfectly nice Joshua Hale Fialkov, shipped last week and immediately sold out. Find it, read it, and weep!

Finally, the second volume of Archaia's Fraggle Rock comic anthology kicks off next week January 19 with the release of Volume 2, Issue 1. There's a four-page story in there written by Jake Forbes and illustrated by yours truly, and you can see a preview at ToughPigs. 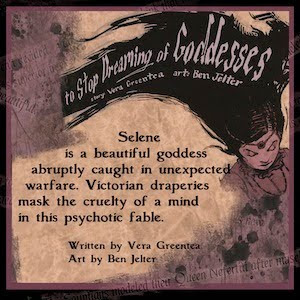 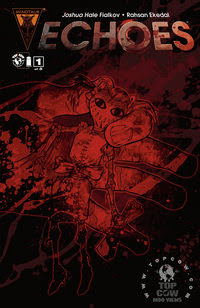 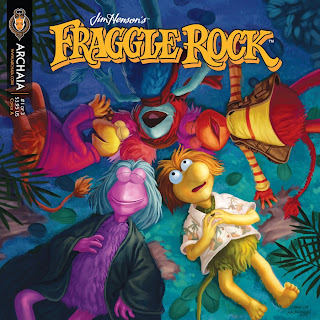 Posted by Mark Simmons at 1:03 PM No comments: